The Basics of Polymerase Chain Reaction

Polymerase chain reaction (PCR) is a valuable tool for genetics researchers that allows them to easily amplify or make millions of copies of specific genes. Even very tiny amounts of DNA can be amplified and then studied. The PCR process was invented by Kary B. Mullis, who won a Nobel Prize in Chemistry in 1993.

DNA Basics
Deoxyribonucleic acid (DNA) is a long molecule made up of a chain of nucleotides. Nucleotides are made up of a phosphate, a sugar, and a base. There are four types of bases: adenine, thymine, cytosine, and guanine. They are often represented by letters, and a string of DNA could be written as AATCGTAATACGTATATCCCCG.
[nucleotide diagram showing 3 components]

DNA is a very long molecule; if we stretched out all the DNA in just one of your cells it would be about six feet long. Sections of DNA are called genes. The order of nucleotides, or sequence, is the “genetic code”, which is very specific. For example, sickle cell anemia is caused by a point mutation, or one wrong letter in the genetic sequence of hemoglobin.

Double Helix
Your DNA (and the DNA in other animals and plants) is double-stranded. The nucleotides on one strand are matched to their complement on the other strand

The components of PCR
Every PCR requires these ingredients 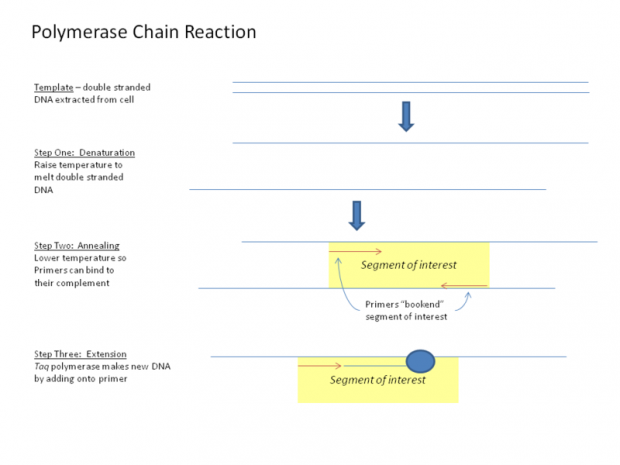